RENT IS BACK HOME

Enter to win a pair of tickets to RENT at New World Stages! Visit www.facebook.com/everythingisrent for details.

Now through September 4, 2011, buy tickets to RENT and save! Click here to take advantage of this special offer.

RENT has canceled the Saturday, August 27th and Sunday, August 28th performances at New World Stages due to expected extreme weather, and the related shutdown of New York City transit. Please contact your point of purchase to exchange your tickets for another date.
Posted by RENT at 6:28 PM No comments: 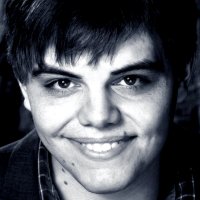 I woke up around 5:00 am E.S.T. after a night of barely any sleep. I grabbed my luggage and suits and threw them into my car. After passing an accident that involved a big rig and a moose, I met up with my friend, Katie and we were on our way. Yes, I was going from one of the most rural towns in America to NYC, the urban/artistic center of the world. Fish out of water? You could say that.

We arrived at the beautiful Roger Smith Hotel prior to our room being ready, but a meeting with Drew Hodges at 3pm meant I needed to be ready now. So imagine, if you will, two hicks from Maine changing out of their travel clothes and trying to quickly put on a decidedly nicer attire in the bathroom of a fancy hotel in NYC. Oh the things I'll do for you, RENT.

We burst out of the front doors of the hotel, looking as nice as one could look by Maine standards, and I took the first steps on my journey as your RENT blogger.

The next day, I stood inside New World Stages with excitement pumping through my veins. I grabbed my camera and began interviewing people outside the theater. (This video would've been posted, had the audio not been messed up.) I met Kristy and Terry from New Brunswick, and three people who had just met through their love of the show. (One guy was from Ireland.) Before I could find someone else to barrage with questions, the doors swung open and the crowd, including me, made their way into the theater.

The stage for the RENT revival is very reminiscent of its predecessor, but gone is the monument of steel that sat proudly on Stage Left. The set is dark and intricate; a mass of scaffolding spreads out and hugs the entirety of the stage. It works. Roger strolls onto stage with his guitar in hand, just like he always did, and the show begins… on Christmas Eve.

RENT is very much the same show. The new musical arrangements will be hard for even the RENTiest of RENTheads to put their finger on… Which is a good thing. The occasional changed or dropped lyric will jar your attention, but that's because we've all listened to the old arrangements thousands of times. A RENT virgin will have no clue that anything was changed. And when you think about the changes critically, you can understand why they were made.

The costumes are new, but recall the same aesthetic feel as the originals. Mark's glasses and sweater have been turned in for a beanie and a plaid shirt; the latter of which recalls Mark's old jacket. Angel's costumes are the most drastically changed. The Santa outfit has been replaced with a costume that makes him look more like a tree ornament, and his Pussy Galore has never looked better. I could go on and on about all the changes, but I don't want to ruin them for anyone.

Jonathan Larson wrote RENT as an ode to his friends living in NYC, some struggling with AIDS. So, the attention grabber of the night was the characterization of Mark… He. Was. Jon. Look up videos of Jon playing his piano on YouTube. Those mannerisms and charismatic qualities were all funneled into our narrator. I applaud the direction, but also the fantastic work done by Adam Chanler-Berat. It was the most wonderful and beautifully poetic thing I took away from this show. It just seemed right.

In my opinion everything about the RENT revival seems right. The cast, the costumes, the set, the sound, the lighting, the direction… EVERYTHING is spot on. Michael Greif said that with so little time between RENT's run at NYTW and its move to Broadway, things that he wanted to update and improve in the show were impossible due to the time constraints. RENT on Broadway was very much the same show it was at NYTW.

But now, it seems with RENT returning to its roots, that this is the best way to see it. Its own sentimentality and newly injected energy sends it over the top. I was sad to think of RENT no longer being what I knew it to be when I saw it those years ago, but that chapter is over. It lives on in our memories, and in our DVD collections.

RENT's new life is something I'm very excited for, and you should be too. RENT opens today. If you are reading this, you NEED to experience it. I promise you won't regret it.

Lottery Details:
RENT will sell 16 seats via a lottery for each performance at New World Stages (340 West 50th Street). The tickets will be $25, cash only. All tickets include a $1.50 facility fee.

Names will be collected in front of the Box Office (outside on 50th Street) from the beginning of the lottery until drawing time. Limit one (1) entry per person, each person may win up to two (2) tickets. Must be present at the time of the drawing to win. Must present valid photo ID to purchase tickets.

For tickets and information about RENT at New World Stages, visit www.siteforrent.com.
Posted by RENT at 3:07 PM No comments: